Stunning in its scenic imagery, bursting with colour. Captivating in its display of the world that lies in the depths of the ocean. Brave in its message to fight the threat of destruction facing the fragile balance of our planet. Wonders of the Sea is a visionary successor of similar works by leading contemporaries such as David Attenborough, Gerald Durrell, Jeff Corwin and more.
Countless creative efforts intertwine to create an “audiovisual feast” that is a pleasure to savour: from 3D filming techniques inventively deployed by director and cinematographer Jean-Jacques Mantello and fellow DP Gavin McKinney, to an epic score composed by Christophe Jacquelin, and locations that had never been filmed before, courtesy of director Jean-Michel Cousteau—the son of late explorer, conservationist and documentarian Jacques Cousteau—and his children, Celine and Fabien.
The film, which took three years to make and is narrated by Arnold Schwarzenegger, begins its astonishing explorations from Fiji, before moving to California and the Gulf of Mexico, all the way to the Bahamas. Special attention is paid to coral reefs, as the socalled “lungs” of the ocean, and the barometer that measures transformations befalling it as a result of climate change.
In showcasing their insights, the Cousteaus don’t fall into the trap of making the film sound like a guided tour. Instead, they bicker in varying English accents, adding a hint of humor to scientific material that could have otherwise been flat and dry. And perhaps Celine’s witty remark that “many have walked on top of the moon, but few have dived to the depths of the ocean” is enough to make us condemn the lack of international attention given to the perils facing the underwater treasures of our world. 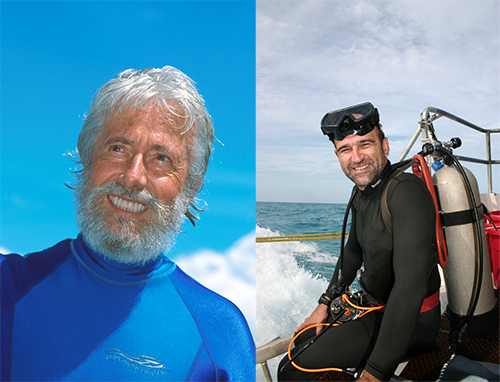 Jean-Michel Cousteau, Co-director, Ocean Explorer and nvironmentalist For more than four decades, Jean-Michel Cousteau has dedicated himself and his vast experience to communicate to people of all nations and generations his love and concern for our water planet. He founded Ocean Futures Society in 1999 to carry on this pioneering work. The Mantello brothers Jean-Jacques Mantello, Co-director & Ocean Explorer, François Mantello Producer and Ocean explorer The pair formed by Jean-Jacques and François, “The Mantello Brothers” is a well-balanced combination: Jean-Jacques, a pioneer in 3D underwater filmmaking, is the director for their films and manages the entire 3D post production process while Francois, produces, finances and oversees all production and distribution activities through 3D Entertainment Films