Italy’s heightened activity during the past few years in promoting co-productions, and how regional film commissions support —through local incentives— the principles of openness and cooperation with international audiovisual producers, has been significantly enhanced by MIBAC (Italian Ministry of Cultural Heritage and Activities). 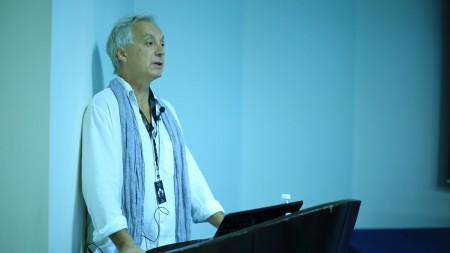 During the 3rd edition of GFF, Cinegouna Bridge hosted a chat with Italian director and producer Antonio Falduto titled ‘Building Bridges: Italian Incentives for International Co-production’ at El Gouna Library. Falduto was inspired by the ideas and research of the Head of International Relations of ANICA, Roberto Stabile.

Falduto discussed the Italian film market, as well as the methods of production and distribution explaining the difficulties and challenges facing the film industry nowadays.  He also expressed his delight to be attending GFF, stating that it is a great opportunity that could pave the road for future productions between Italy and the Mediterranean countries, specially that they share historical, cultural and artistic ties.

He then talked about the latest joint agreement between ANICA and Manart Festival for Mediterranean Cinema in Tunisia, which focuses on promoting co-production opportunities. Stating that these agreements facilitate partnerships with Italy and other European countries, highlighting that the agreement includes the possibility of producing an Arabic film.