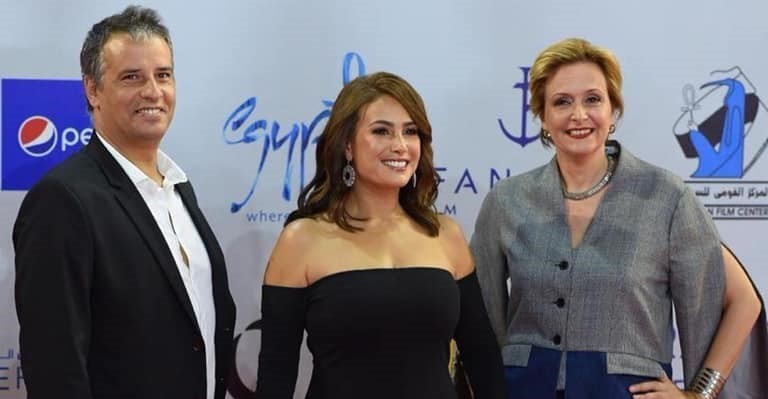 The film follows the story of Noura who works at a laundromat to make ends meet, while her husband, Sofiane, serves time in prison. She meets Lassaad, who becomes the love of her life, and while they wait for Noura’s divorce to be finalized, the lovers’ dream of starting a new life is jeopardized by Sofiane’s imminent release.

The Festival also featured several distinguished films, such as Pain and Glory by Pedro Almodóvar, starring Antonio Banderas, who received the Best Actor award at the 72nd Cannes Film Festival for his role in the film; and Our Lady of the Nile by Atiq Rahimi, shortly after its premiere at the Toronto International Film Festival. This is in addition to the feature documentary African Cinema: Filming Against All Odds by Férid Boughedir, as part of the special presentations.

The CineGouna Bridge program included ‘The State of Film Distribution’ presented by Film Independent and the U.S. Embassy in Egypt. The discussion was moderated by Myriam Sassine, a Lebanese producer at Abbout Productions; and included panelists Missy Laney, Director of Development at Adult Swim; Jordana Meade, Director of Distribution at ITVS; and Rebecca Sosa, a film executive and consultant specialized in impact distribution. The panel shed light on a snapshot of the distribution landscape today, explaining the various ways you can distribute your film and monetize your content, with real examples.

In addition, a panel discussion entitled ‘The Art and Science of Financing’ was held, in which moderator Leo Barraclough, international features editor at Variety, explored alternative sources of funding, and ways to build financing from several different sources including grants from foundations and crowdsourcing, pre-sales and in-kind donations. The panel explored the topic of financing and monetization both through the perspective of funding institutions, and that of film directors and producers. The panelists included filmmakers, producers and industry experts such as Karim El Shenawy, Rula Al Nasser, Dina Emam, Wendy Ettinger, Jo Mühlberger and Elizabeth Radshaw.

On its seventh day, the Festival will present Cinema in Concert, which will be conducted by Maestro Ahmed El Saedi, the main founder and chairman of the Egyptian Philharmonic Society, with the performance of soloists Janet Sung on violin; Federico Mondelci on saxophone; Victoria Kapralova on violoncello; and the vocal performance of Amina Khairat. The first segment of the program is entitled Hits of Hollywood, and is dedicated to paying homage to the timeless works of music that accompanied some of the most memorable films. The second segment, Homage à Nino Rota, will celebrate the composer’s works for Federico Fellini and Luchino Visconti films.

On September 25, the CineGouna Bridge program will include a presentation entitled ‘The Production of Hulu Series The Handmaid’s Tale’, presented by Lindsay Sloane, The Senior Executive Vice President and Head of Scripted TV Development at MGM Studios. Sloane will share with the audience her personal experiences during the planning and production stages of the show, enriched with inside stories, fun facts and trivia.

In addition, a workshop entitled ‘Facebook and Instagram Best Practices’ will be held, delivered by Sara Abu Zahra, Strategic Partner Manager at Facebook, and Samer Johnny Jamal, Strategic Partner Manager at Instagram. The workshop will attempt to answer questions regarding the utilization of social media by filmmakers, such as: “What are the best practices to achieve your goals in your field?” and “How can the power of networking sites be optimally utilized?”